Twitter Facebook LinkedIn
Born from the music and dance of immigrants in the late nineteenth-century suburbs of Buenos Aires, tango has been a metaphor for longing, passion, and the search for identity. Complex and ambiguous, over time, tango bridged different ethnic, social, musical, and even geographical worlds. Diverse cultural and historical coincidences shaped tango into a genre whose refinement is all but coincidental. The history of tango reflects a subtle relationship between coincidence and purpose, a twosome that so often is the crucial ingredient in the great creations of mankind. The encounter between tango and Peter Breiner also can be seen as both random and inevitable. As a composer, arranger, pianist, and conductor who moves comfortably among numerous musical styles, genres, and performance venues, Breiner found in the multiple musical and cultural dimensions of tango a natural habitat, where crossing-or, perhaps, erasing-boundaries not only was allowed but virtually inevitable.

The roots of tango history are entangled in the social and cultural diversity of the nineteenth-century River Plate (Río de la Plata) region, centered in Montevideo and Buenos Aires, which attracted European immigrants from Spain and Italy, seeking a better life. They came together there with native Argentines, Europeans born in Argentina, and a black population of both African and Argentine origin. From this fertile mixture was born the dance, music, and poetic elements of tango. The etymology of the word “tango” has been the subject of heated discussions, but there can be little doubt that its dance and rhythmic features bear traces of Cuban dances, namely habanera, which had spread throughout South America by the mid-nineteenth century, and in Brazil had been adapted as tango brasileiro. Black Cuban sailors arriving in Buenos Aires brought with them the habanera, where it was undoubtedly influenced by the steps of Afro-Argentine dancing groups called candombes. The result was the milonga, a dance in duple meter and syncopated rhythm, which contributed to the rhythmic structure of the tango. No less important was the artistic participation of gauchos, who added the stamping patterns and rigidity of the Andalusian fandango to the tango dance, and the Andalusian trilling technique to the tango song. 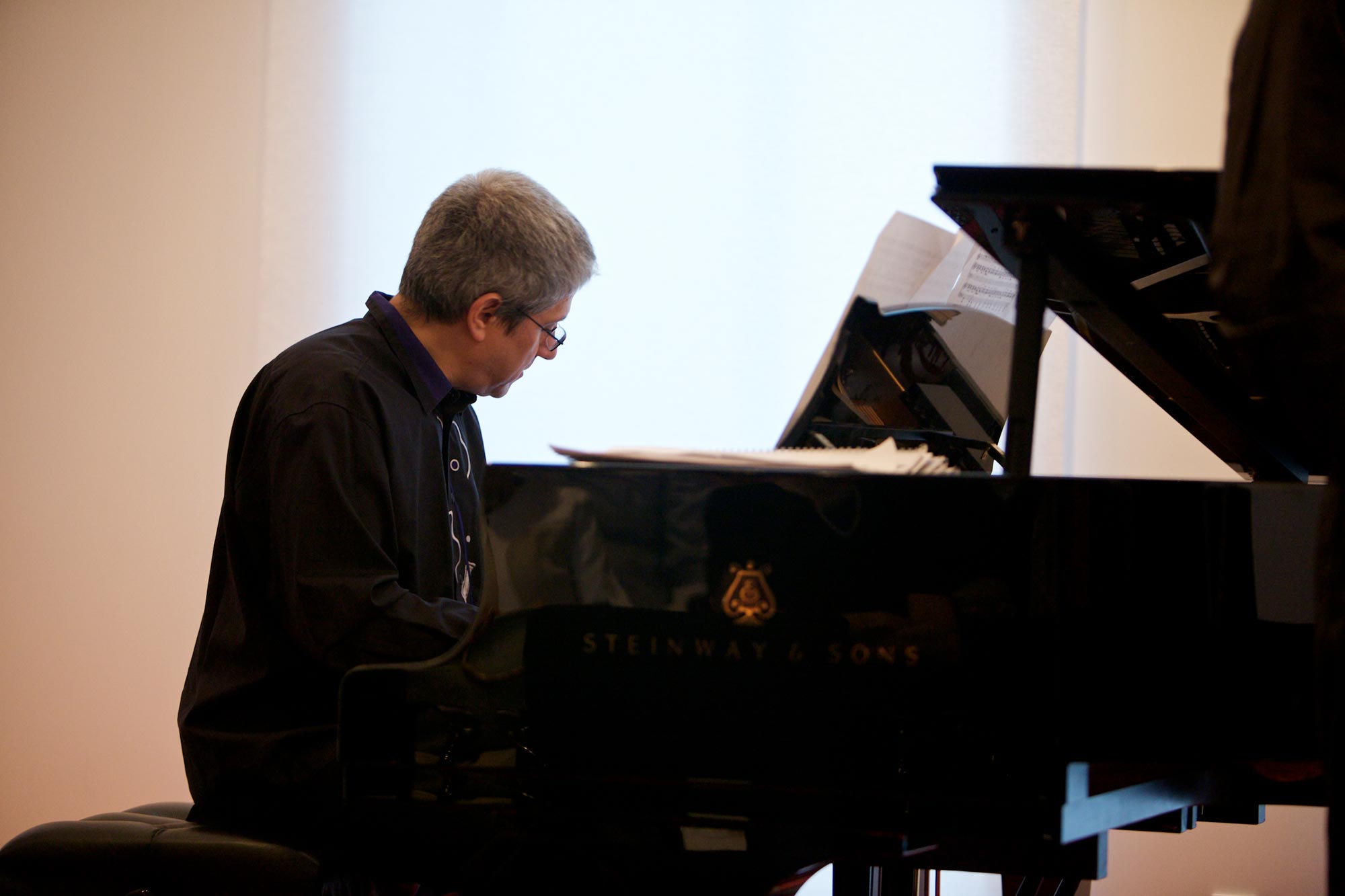 By the turn of the twentieth century, Argentine tango as we know it today had pushed its way from the poor suburbs of Buenos Aires into the salons and ballrooms of the upper class, where initially it was disdained for its violent and sexual character. But the simultaneous spread and growing popularity of tango in Europe-mainly Paris-accelerated its acceptance into downtown Buenos Aires. Along the way, tango absorbed the passion, seriousness, longing, outrage, despair, and insecurity of Argentines, who were questioning their own identity. Some scholars have interpreted the flamboyance, rigidity, and elaborately staged and restrained behavior of the dancers as a mask for those ambivalent feelings. Anthropologist Julie Taylor has said that tango, in all its respects-lyrics, dance, and music-reflects the precise nature of that Argentine ambivalence. She contends that Argentines resort to the tango as “a way of confronting the result of their search, a self-definition whose very essence is doubt.”

The lyrics were an essential aspect of the genre; they molded its nostalgic character. Still, the tango was more “a sad thought danced,” in the words of Enrique Santos Discépolo, one of the great tango lyricists. Audiences wanted dancers, and dancers wanted music-not words-because “when sadness comes in, it is a thought to which they listen.” Thus, Argentine dancers move to lyrics they can hear even when they are not sung. So the writing has continued, and the silent tango texts enhance the tango’s intimate and reflective nature. 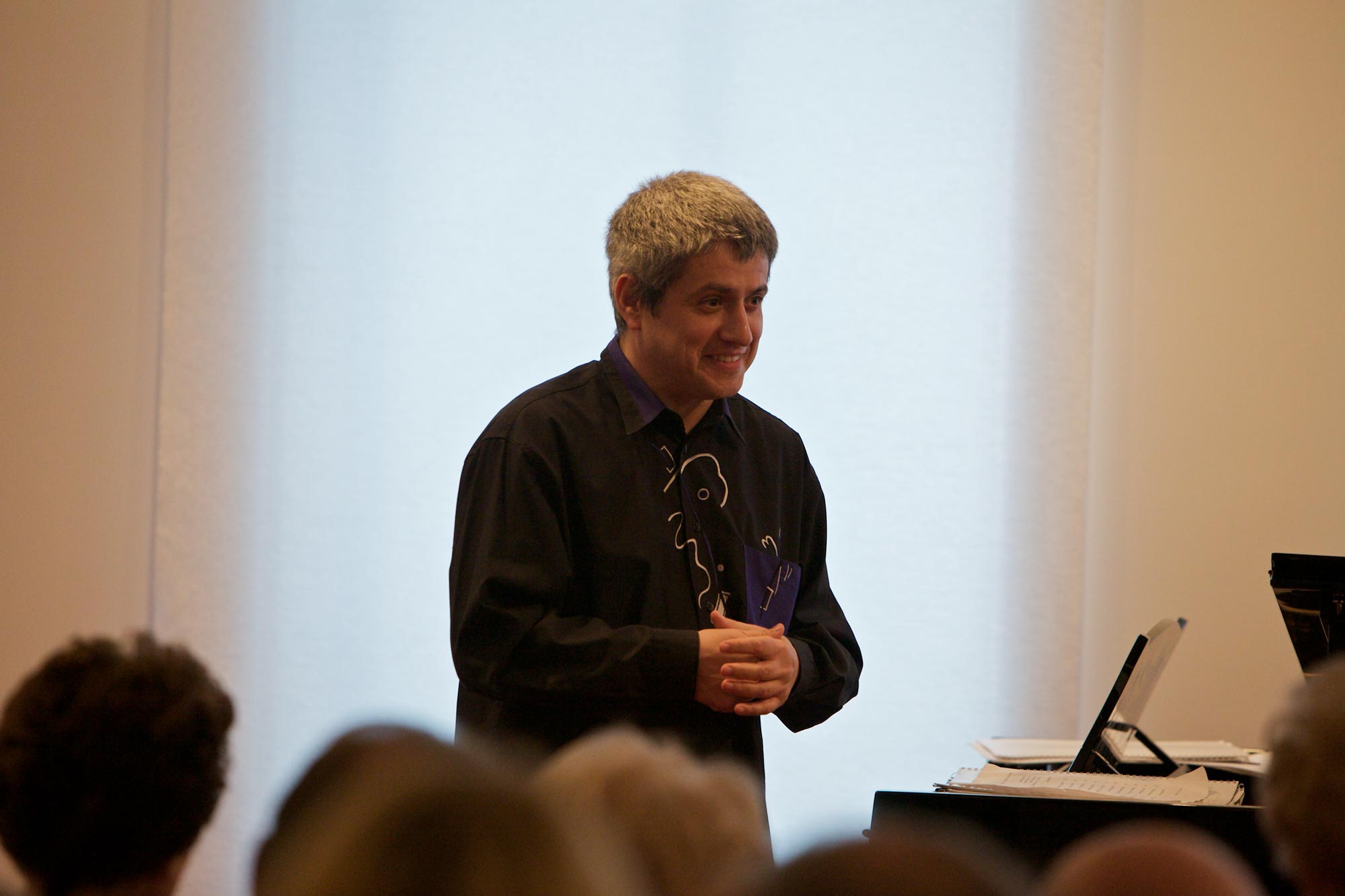 Tango music developed in kaleidoscopic turns, a brightly colored “seething and shifting” of its heritages. The neo-Kongo bass beat of habanera, with a simple melody played over it, later changed to the four-beat el cuatro. The original tango ensembles were instrument trios consisting of flute, violin, and guitar, with the accordion or piano sometimes replacing the guitar. Around 1900, a new combination emerged, made up of the violin, piano, and bandoneón (a diatonic accordion with 38 and 33 buttons on either side of its bellow). After 1911, when bandoneónist Vicente Greco (1889–1924) formed the first orquesta típica, which featured the violin, flute, guitar, and bandoneón, larger bands were formed, some of them comprising as many as four bandoneóns, two violins, one violoncello, one double bass, and a piano. The famous bandleaders and composers of tango, including Francisco Canaro, Roberto Firpo, Julio de Caro, Osvaldo Pugliese, and Horacio Salgán, among many others, each added to the ever expanding repertory of musical elements. But it was especially the rhythmic percussive ornaments, such as arrastre (a peremptory roll in the bass functioning as a drag), and an offbeat phrasing, síncopa, that became the signature elements of tango. 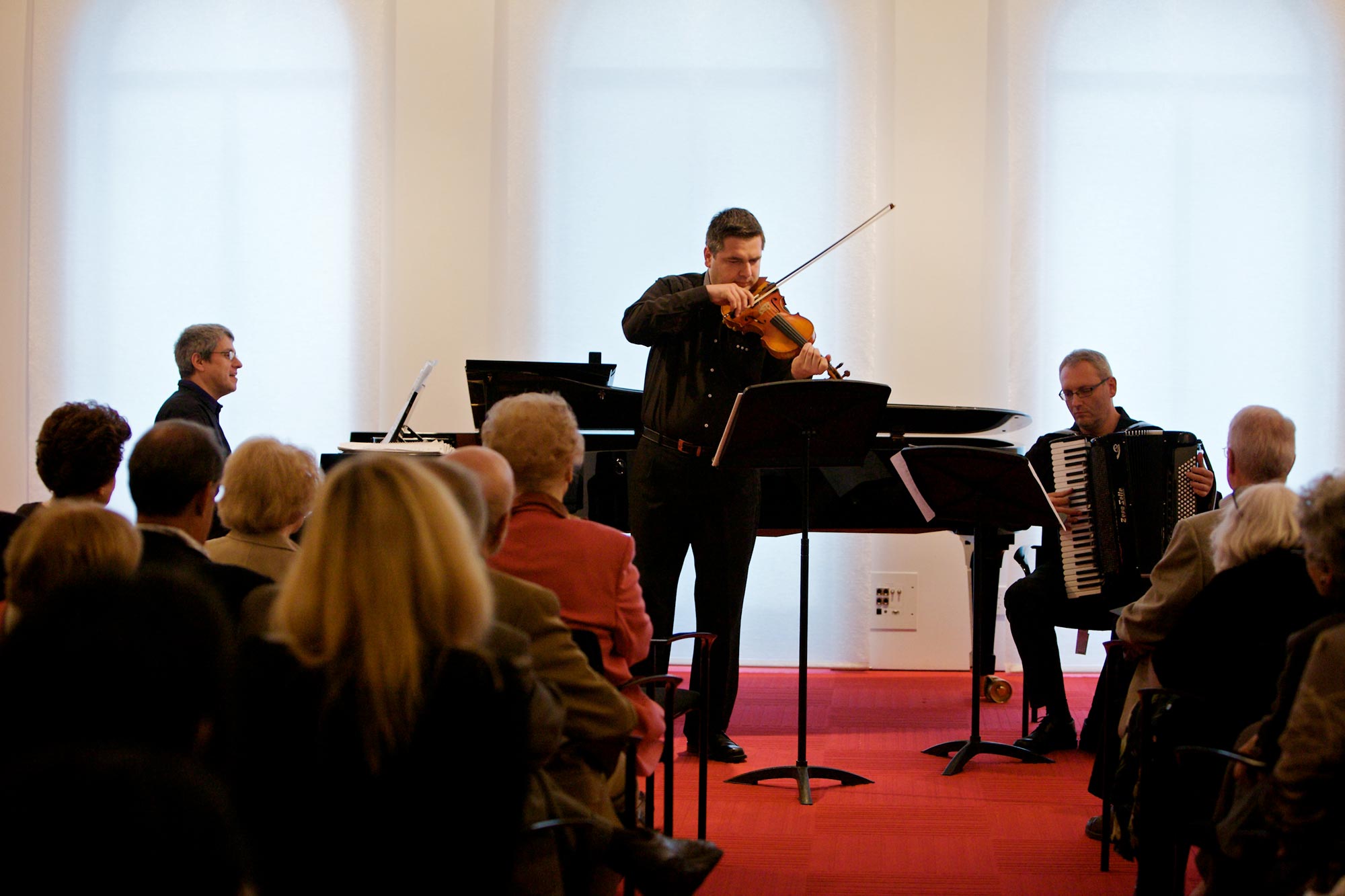 In the 1950s, starting with Pugliese and Salgán, and continuing with Astor Piazzolla (1921–1992), tango music became intermingled with jazz and classical music. Piazzolla, who studied composition in Paris with Nadia Boulanger, transformed traditional large-scale tango into the so-called tango nuevo. He replaced the large band with a smaller chamber ensemble; introduced a more ambitious harmonic spectrum, a Baroque-like contrapuntal language; transformed the articulation and phrase structure; and incorporated elements of jazz. He wanted to elevate tango musically and to spotlight the virtuosity of the musicians, while renewing the popular tango yet preserving its essence. As Martín Kutnowski wrote, Piazzolla took tango “out of the ballroom and made it appropriate for the concert hall.”

“The tango bears strong yet mutable links to place and culture, wrote Chris Goertzen and María Susan Azzi, in “Globalization and the Tango.” This “semantic flexibility” and the ability to link times, spaces, and styles, predestined tango for globalization and international fame, spreading its popularity to such distant places as Japan, Finland, and Slovakia. It is this multidimensional character that also resonates with musical polyglot Peter Breiner. Although not so unusual in the past, today it is rather rare to see the concert pianist conducting the orchestra from behind the piano and, eventually, playing his own music. Breiner is a complete musician: he plays, arranges, and conducts the music of disparate styles and genres, from classical, jazz, popular, and film to folk and the traditional music of various world cultures, revealing fascinating connections between them. Thus, Breiner’s rendezvous with tango is both natural and unique. As a pianist/composer/arranger, he shows us the interconnection between jazz, tango, and classical music, accomplishing what pianists who specialize rarely can, or do. 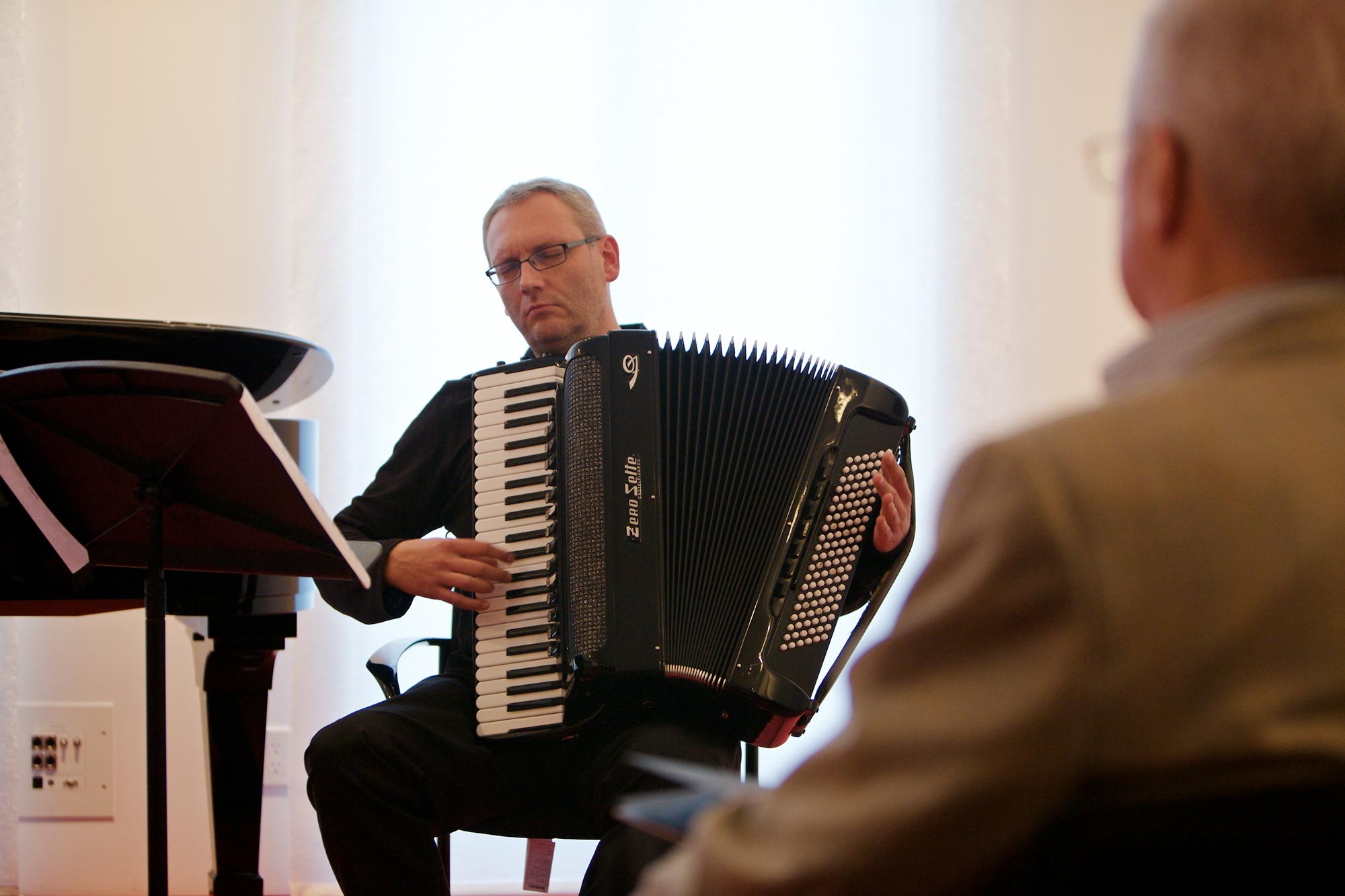 In the Argentinean tango Breiner discovered “a new and completely original phenomenon: music containing an awe of the intensity unknown in any other musical genre.” In his arrangements of classical tangos, he revived Piazzolla’s intention to promote tango musically, unveiling its unknown stylistic possibilities, while allowing musicians to exhibit their individual mastery. Incorporating the musical-stylistic elements of Baroque and the Classical era, along with “jazz improvisations, a taste of central European waltz, playing based on a detailed research of sources but also on a maximum creativity where stylistic distance provides an extraordinary and observant insight,” Breiner enriches the classical tango of Arturo Bernstein, Tito Ribero, Alfredo Eusebio Gobbi, Pascal de Gullo, Carlos Gardel, Julian Plaza, Cole Porter, and Astor Piazzolla, among others. He approaches the work of traditional tango composers with a refreshing energy and humor, alleviating the sometimes too heavy despair and sentiment of tango with witty and congenial musical surprises (rhythmic percussive scratches, played by violin; sudden jazz passages; and dissonant harmonies). His sensitive arrangements of old tangos respect the personal styles of their authors, retaining the tango character while at the same time imprinting his own distinct signature. Breiner’s fluency in many musical languages is most effectively revealed in his original tangos, notably “Miss Mendacity” and the beautiful, nostalgic piece with the ideal tango title, “When? Never?”

Tango is just one in the broad scope of Breiner’s arrangements, which range from the music of Bach, Gershwin, and Čajkovskij to Russian folk songs, Christmas carols, Baroque music, the Beatles, Elvis Presley, Chinese and Malaysian music, and, most recently, Leoš Janáček’s operas. In all of them, he successfully links styles and periods. In the late eighties, as a young composer from a small town in the former Czechoslovakia, it was his Beatles concerti grossi, “Beatles Go Baroque,” that paved the road for him to a global audience. His sensitivity to emotional nuances and mood also enabled him to become a prolific author of film scores. Today he is one of the most recorded artists in the music industry; he is featured as a composer, arranger, pianist, or conductor on more than 150 CDs, as well as on television and radio programs. 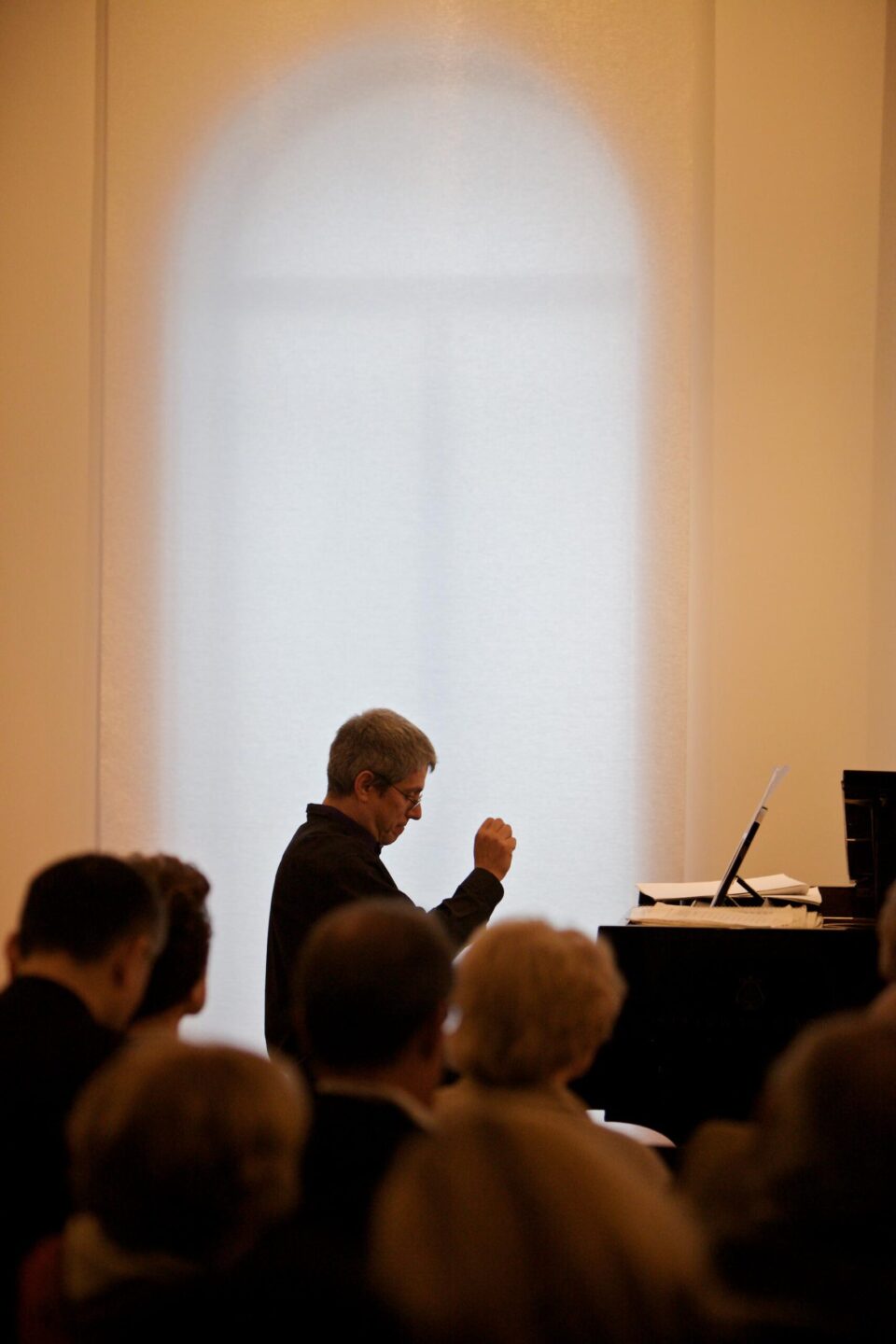 The world was listening to the work of Peter Breiner at the 2004 Olympic Games in Athens, for it was his arrangements of the national anthems of the 200 participating countries that were selected to be played at the awards ceremonies. His interpretation of the U.S. national anthem provoked lively-some would say, controversial-responses from the American people, and demonstrated succinctly his deep understanding of and creative responses to any music he approaches. In his thought-provoking arrangement of “The Star Spangled Banner,” he presented the victorious verses of the middle part (“And the rockets red glare, the bombs bursting in air…”) using a musical contrast of soft-sounding strings in high register, thus leaving space for a moment for contemplation. The composer says he was “surprised and overwhelmed” by the reactions, and by the “power of music,” when the people listening to his arrangements were, as he puts it, able to “read between the lines.”

Breiner, who lived in Toronto from 1992 to 2007, before moving to New York City, performs frequently in his native country. It was on one of his trips to Slovakia that he met the musicians Stano Palúch and Boris Lenko, which led to the collaboration that, eventually, produced the tango arrangements to one of Breiner’s most successful projects. In Triango, which Diego Fischerman calls “a fertile mixture of the trio-violin, accordion, and piano-and tango,” Breiner’s tango arrangements are interspersed with classical music and jazz improvisations and marvelously synchronized, with the three musicians each contributing in his unique way. Breiner says: “We put a lot of emphasis on improvisation; sometimes, in the most inspired moment we don’t even follow the agreed form…. We do have written arrangements, with some space for improvisation in almost every one; but even the way we play the arranged passages every time is slightly different, depending on our mood, audience reactions, and many other factors. The magic of playing in a chamber ensemble that improvises is that there are moments when we ‘read each others’ minds,’ and that results in some great moments.” 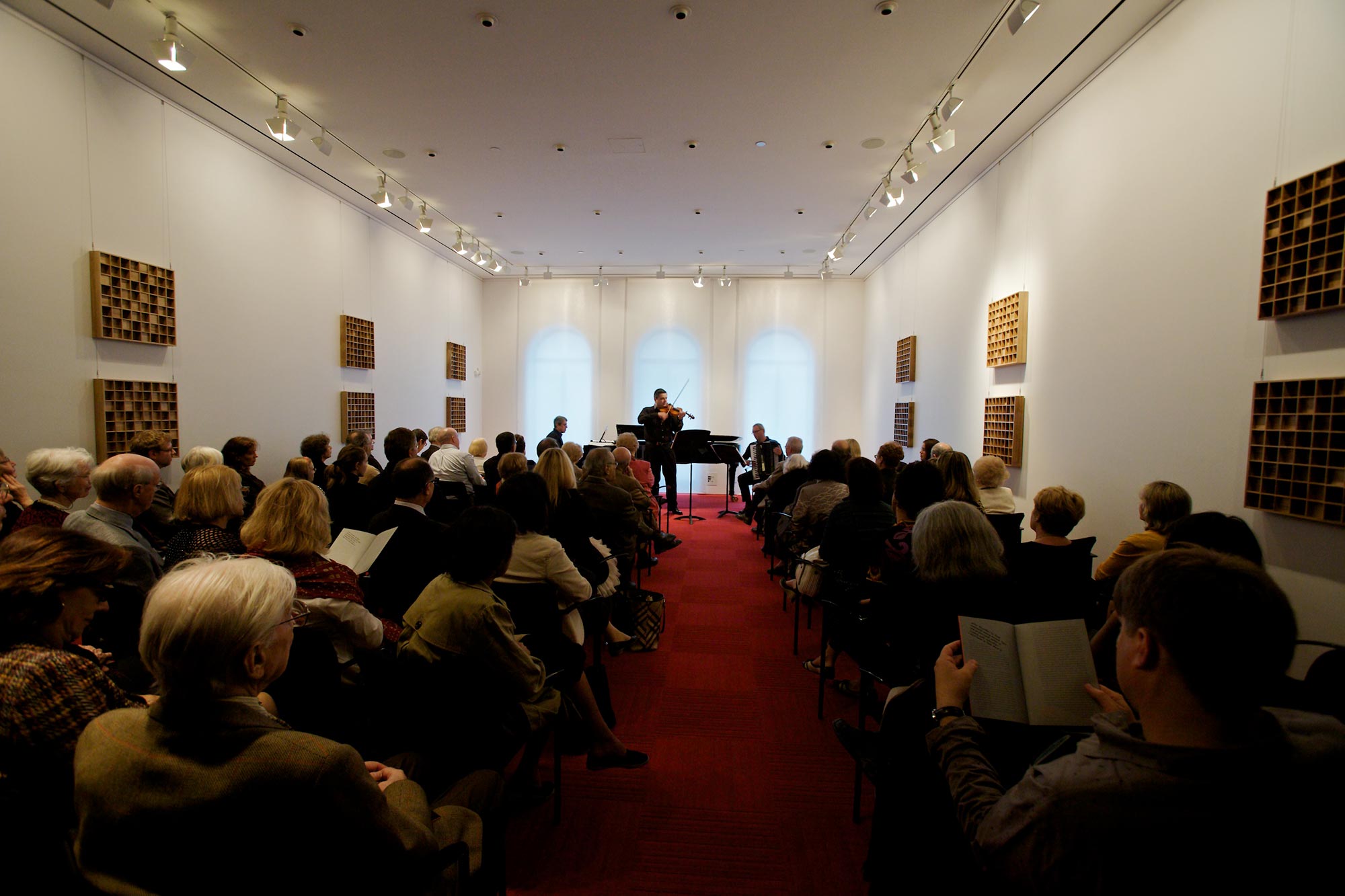 Peter Breiner and Triango bring us closer to the theme and mission of the Vilcek Foundation, to facilitate the crossing of borders and new beginnings. Tango succeeds in reaching us all with its timelessness, nostalgia, and semantic flexibility, because we all are immigrants, in one sense or another. Like the blend of immigrants whose search for identity helped give birth to the tango, we are all-in the decisions we make, the lives we lead, the work we dream of doing but never quite manage, and the choices we feel obliged to make to satisfy expectations of others¾constantly questioning and negotiating our identities.
__________