Working on a puzzle: Lily and Yuh-Nung Jan 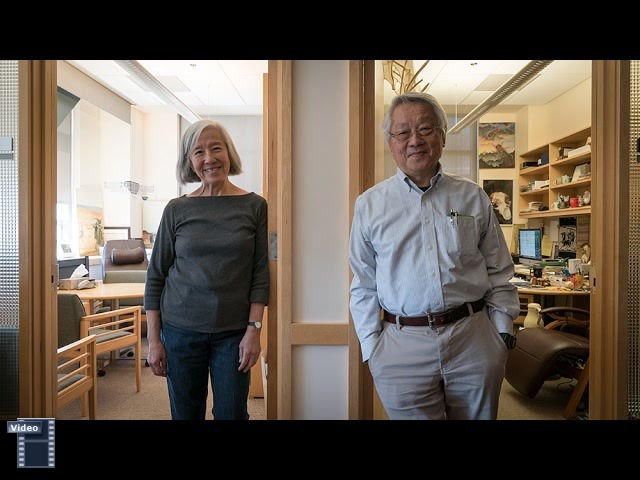 “What we have been doing all these years,” says Lily Jan, “it really is like working a puzzle.” The simile is an apt one; Lily, along with her partner and collaborator, Yuh-Nung Jan, have made several discoveries in the field of neuroscience, including insights into how neurons diverge, as they develop, into thousands of distinct identities, as well as identifying the processes that guide the development of dendrites, their intricate, matching counterparts. For this, and for other discoveries, Lily and Yuh-Nung were jointly awarded the 2017 Vilcek Prize in Biomedical Science.

It’s tempting to apply the same image of puzzle pieces to the pair themselves, who have been working side by side for over four decades, both inside the lab and out. Born in China and raised in Taiwan, they were part of an elite group of students who matriculated into the National Taiwan University, where admission was granted only to those who ranked in the upper percentiles of the common entrance exam—Yuh-Nung scored among the top 10 out of approximately 30,000 students—or, as in Lily’s case, by earning grades that placed them among the top 1 to 2 percent in Taiwan’s best high schools.

At NTU, both ended up in the physics department rather capriciously: Yuh-Nung flipped a coin to decide between physics and medicine, while Lily promptly enrolled after being advised that physics was not a suitable field for women; it was there where their paths first crossed. By graduation, they had decided they would leave Taiwan, as options for advanced studies did not exist there during that time, and they would do it together.

They headed to the U.S. to enroll in the theoretical physics program at the California Institute of Technology, although they were soon inspired by the renowned biophysicist Max Delbruck to switch to biological sciences instead; shortly after, Lily and Yuh-Nung decided to get married. After completing PhDs in biology, the couple were accepted into the laboratory of Seymour Benzer, also at Caltech, for their postdoctoral training; it was there where they first struck up the scientific partnership that continues to this day. They complement each other so neatly that, by their calculations, they figured that even their embryonic development may have started at the same time. The image of them as two precise, interlocking puzzle pieces falls apart, however, when one considers the sheer breadth of their output; it is, as Lily says, “much bigger than the sum of two individuals.”

Now professors of molecular physiology at the University of California, San Francisco, as well as Howard Hughes Medical Institute Investigators, their collaboration has produced several fundamental insights on the development and function of the nervous system. The most significant of these insights includes their illumination of the process by which neurons differentiate themselves from their progenitors, develop distinct identities, and establish interconnected circuits in the brain and nervous system. Using fruit flies, Lily and Yuh-Nung Jan pinpointed multiple genes, like cut and numb, which influence the onset and course of neural development and wiring, and atonal, which is implicated in vision and hearing.

Later, they turned their attention to understanding the process of dendrite development. A neuron has two major parts, says Yuh-Nung: the axon, which sends signals to a target cell, and a dendrite, which receives signals from other parts. Despite there being thousands of different neuron types in the nervous system, each type of neuron develops a specific, corresponding dendrite. Little was known about dendrite development when the Jans first focused their attention on it, but since then, they have uncovered several genes implicated in dendrite development and regeneration. Their research in this area may also help us better understand, in the future, nerve regeneration, touch perception, and human mental disorders such as autism and schizophrenia. They have also isolated the genes responsible for potassium channels, proteins that shuttle potassium ions in and out of cells. These proteins control the flow of signals in the nervous system and are implicated in a wide variety of body functions, such as heart rate maintenance, hormone release, and muscle movements, and in diseases such as epilepsy, ataxia, and hypertension. Similarly, they identified the genes for another family of channels called calcium-activated chloride channels, which shuttle chloride ions to control smooth muscle contraction in the stomach, intestines, and lung airways.

The Jans’ research on both potassium channels and calcium-activated chloride channels has led to several unexpected discoveries; a gene they found to be associated with calcium-activated chloride channels, for example, had already been previously implicated in many different kinds of cancers. Although they are not yet sure what to make of the link, the Jans enjoy this sort of unexpected twist and the avenues it opens up in their research. “Quite often we came into surprises, functions we didn’t even think of,” Lily says.

But that seems to be the way of the Jans: More than just a simple addition, their curiosity and intellect multiplies when in tandem, leading to not one route forward, but several.