Side of grasshoppers? He works to add ‘flying vegetables’ to our diet

“They taste like vegetable chips,” Mansour Ourasanah says of the grasshoppers he’d like you to eat. The insects, he explains, taste like what they consume: “They’re essentially flying vegetables — with some guts.”

Ourasanah, 29, a senior designer for Whirlpool’s Advanced Studio in Chicago, finds he often has to describe the flavor profiles of insects. His product, Lepsis, is a kitchen appliance that grows, harvests and kills grasshoppers — and allows consumers not to touch the critters until it’s time to cook them. More than a culinary curiosity, the product aims to provide a viable solution to food shortage. Ourasanah’s device has earned him the Vilcek Prize for Creative Promise, along with $35,000, and he was named a finalist for Denmark’s Index: Award.

For Ourasanah, food shortage isn’t a distant abstraction. While growing up in the West African country of Togo, he regularly went hungry. “When there wasn’t enough to eat, my friends and I would go out and just scavenge for anything we could find. And that means insects, rats,” he says. “I always felt that experience was normal.”

When he was a small child, his parents moved to the U.S. in search of a better life. At age 16, he joined them — and encountered a profoundly different food culture. “Even though my parents didn’t have all the money in the world, there was always food in the fridge,” he says. “When I first got here, McDonald’s was my favorite.”

After studying design at the University of Notre Dame, Ourasanah began working at a design consultancy in Philadelphia. Two years later, his father passed away. He realized, “I don’t want to waste any more time.” He moved to Sweden to attend the Umeå Institute of Design, and for his master’s thesis, he set out to create an alternative to the West’s environmentally harmful meat addiction.

“Half of our usable land is used to produce meat, and my question is, When we start running out of land, what is going to happen?” he says. “The production and consumption of insects is much less demanding on the environment.” 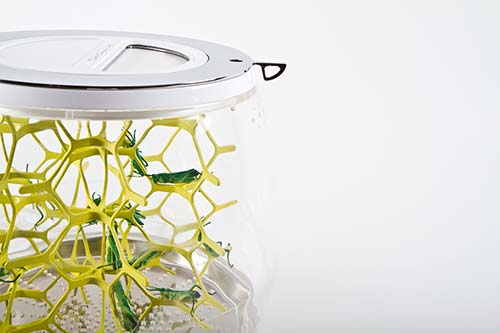 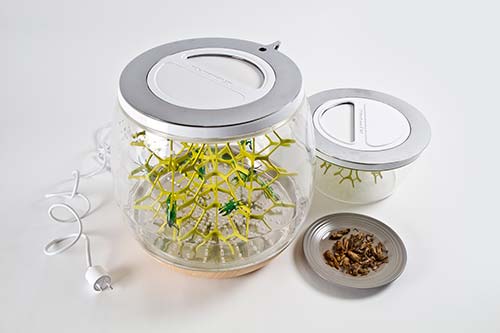 The sleek, terrarium-like Lepsis has fairly modest demands — some space on your kitchen countertop. Its base unit warms the grasshopper eggs buried in its soil, and its middle nesting unit houses the hatched insects. “You have to harvest them as soon as they get to adult size,” he says. “Otherwise, they start eating each other.” The detachable feeding section also keeps the insects from regarding one another as their next meal.

“What I love about this project is it’s about real-world issues and it has potentiality — it could become a reality,” says Zoë Ryan, the John H. Bryan chair and curator of architecture and design at the Art Institute of Chicago, who served on the Vilcek jury committee.

Ourasanah wants to realize that potential. For his master’s thesis, he found a corporate sponsor in KitchenAid, but the company decided not to take Lepsis from prototype to product. 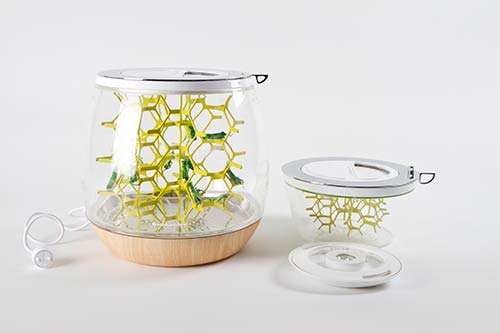 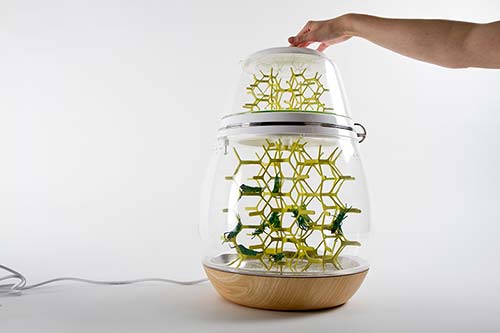 “Lepsis is a great example of how we like to keep exploring the future of food,” says Leif Norland, design director for North America of major and small appliances at KitchenAid’s parent company and Ourasanah’s current employer, Whirlpool. “In the future, we may develop and launch products” similar to Lepsis, Norland says, adding, “Mansour is one of our most talented designers.”

For Lepsis to make the leap from a design prototype that cost $5,000 to build to a product that could cost consumers from $300 to $500, Ourasanah says it would need to be re-engineered with cheaper materials for mass production. So far, Ourasanah says, he has been approached by three investors, but he chose not to pursue them. They wanted to market Lepsis in Africa and Mexico, whose populations are among the 2 billion in the world who already engage in entomophagy — the eating of insects.

“That was never my intention,” Ourasanah says. “I want to show people in Western countries that it’s possible here as well. It’s not about taking meat out of your diet. It’s more about supplementing it with something that is actually good for the environment.”

The U.N. endorses that sentiment. Its Food and Agriculture Organization promotes the consumption of insects, which require significantly less land and water than cattle. Livestock production accounts for 70 percent of all agricultural land use, and the global demand for livestock products is expected to more than double from 2000 to 2050.

Yet the U.N. agency also acknowledges the biggest barrier to Western countries’ adoption of insects as an environmentally friendly protein source: consumer acceptance.

“Some people say, ‘I don’t even like sushi, why would I eat an insect?’” Ourasanah says. “People take it personally when it feels like you’re attacking their way of life, the things that define them — and food defines a lot of cultures.”