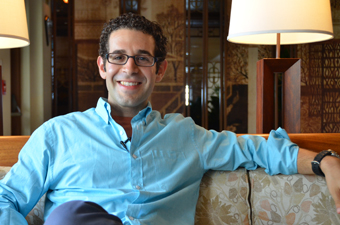 Ronen Landa is the composer for Paraíso, an award-winning documentary short about Mexican immigrant window washers who clean the skyscrapers in Chicago. Born to Israeli parents, Landa is a delegate of the New American Filmmakers program at HIFF 32. Professionally, he is currently working on scoring two feature-length documentaries. In his personal life, he is expecting a baby with his wife Yael. The Vilcek Foundation talked with Landa about his immigrant background, his musical experiences and influences, and his work scoring Paraíso.

VF: When did your family immigrate to the United States?

RL: My parents came to the United States from Israel in 1968. They came originally thinking they were going to be here for a short time, but they stayed and raised a family.

VF: How does your Israeli heritage and being a first generation immigrant influence your work as a composer?

RL: Having an international heritage exposes you to all kinds of culture and idea and you wouldn’t necessarily see otherwise. It gives the artist a unique perspective.

VF: You played rock & roll in high school and college. What do you recall about those experiences?

RL: I played with a bunch of bands. One was called called Dan, Dave, and the Other Guy.

VF: You were the other guy?

RL: [Laughs] Yes!  I am constantly playing music with friends. I started out as someone who loves music and want to bring music to people.

VF: How did you come to work as a composer who scores films?

RL: There was a period when I was a teenager where I listened to music that was very spiritual and intense. I always think back to that moment – I wanted to bring music to others. From then on, I’ve always wanted to learn about music. It stared a natural progression of learning about jazz and other forms of music around the world. Eventually, that led me to film scoring, because I could make use of all different styles of music.

VF: How did you create music for Paraíso that set the right tone to accompany the film’s dazzling visuals?

RL:. The film is very spiritual. It has some deep meanings about these immigrants, whose everyday life involves them living literally on the edge. The director, Nadav Kurtz, was looking for sounds that could complement the film and would bring emotions to the story. The sounds have to be subtle to let the image speak. As such, I played a lot of music instrument – guitar, charango, cello, piano and all kinds of sound went in there – to find the perfect balance.

VF: Who influences your music?

RL: I feel like I’m influenced by every friendship that I had, every kind of music that I’ve heard in the past. These elements all came in and came out in unique ways. I’ve always been inspired by many artists. Even by scientists who push the norms. You look at all the arts – there are so many wonderful artists who want to go beyond the limit, to go one step further. They all provide influences to my music.

VF: Paraíso has played several film festivals, including HIFF. Where is the film going next?

RL: Fingers crossed that it’ll be the Academy Awards! We just found out that Paraíso was shortlisted for an Oscar nomination for best short documentary films. Eight films were shortlisted and four will be nominated. Paraíso has been doing extremely well in the film festival circuit. It won the Best Documentary Short Award at the Tribeca film festival and the Jury Award for Best Documentary Short at the Seattle Film Festival.