Through its Guest Filmmaker Program, the Hawaii International Film Festival  connects industry professionals with film students, giving young talent a firsthand look at life in front of and behind the camera. The 2011 program was proud to introduce two delegates of the American Immigrant Filmmakers on Profile (AIFP)—Bertha Bay-Sa Pan, director, writer, and producer of ALMOST PERFECT, and Ian Gamazon, director and writer of LIVING IN SEDUCED CIRCUMSTANCES—to classes at James Campbell High School and Waipahu Intermediate School on O’ahu. Each offered a completely different perspective on the filmmaking process, and both came away inspired by the energy, curiosity, and knowledge of the students in attendance.

Mr. Gamazon, who suffers from public speaking anxiety, was quickly put at ease after showing 33 students of the IB Film class at Campbell High School a clip from his award-winning film Cavite. He was taken by the high-level technical questions they asked about lighting, camera angles, shot variety, camera types, script writing, and more.  By way of answering their questions, Mr. Gamazon explained how to make films on various budgets, develop a story from a visual idea, and then turn it into a screenplay. 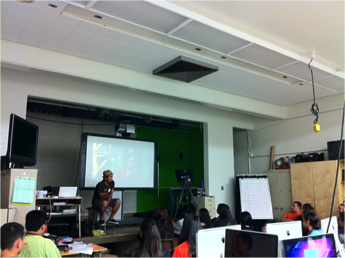 Taking the stage at Waipahu Intermediate School, Ms. Pan spoke to a Media and Exploratory Video class of 50 students, who are learning to make public service announcements. In sharing her far-reaching experiences (she has worked on animations, music videos, and feature and documentary films), Ms. Pan engaged and inspired the future filmmakers, by giving them tips on how to make a memorable public service announcement, draw inspiration for a story, and prepare for a film shoot using storyboards and schematics. 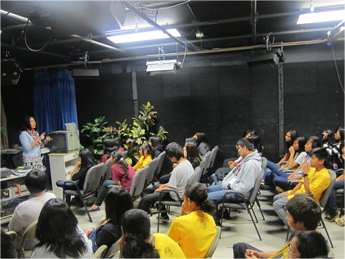 Each year, HIFF presents the STUDENT SHOWCASE, a selection of films submitted by primary and secondary students throughout Hawaii and from around the world. All young talented filmmakers are encouraged to submit their work to HIFF!