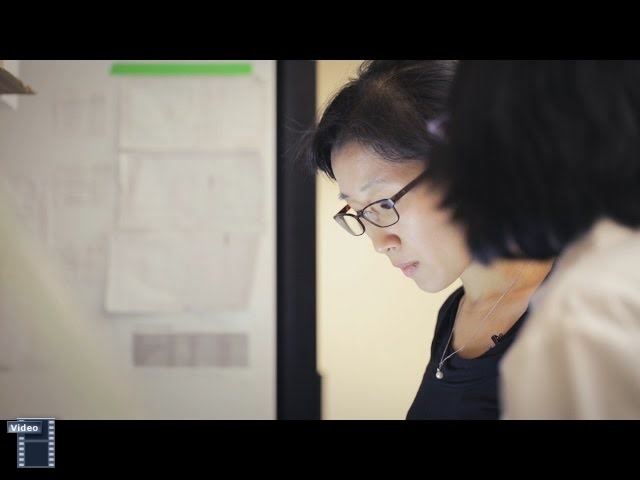 South Korean-born Sun Hur has been on a lifelong quest to apply theory to reality, order to chaos.  It is a quest that has brought her from painting to physics, physics to computational chemistry, and from there, to structural biology, biochemistry, and finally, immunology.

During her childhood, Sun spent most of her free time in art classes, painting and drawing her favorite subjects: the human face (she especially loves drawing facial expressions) and still-life compositions.  In still lifes, she is drawn to the “process of identifying an abstract ‘theme’ or story underlying what may seem at first [to be] randomly placed objects,” Sun wrote in an essay.

This process is what fascinated Sun about physics: It allowed her to ask fundamental questions — “How did the universe actually begin?” she poses — and gave her the tools to answer them.  Sun majored in physics at Ewha Womans University in Seoul, with dreams of becoming a theoretical physicist.  Deeper studies, however, led to dissatisfaction: The “realization of the gap between the elegance of abstract theories and their real-world application struck me as surprising,” Sun says.

She decided to hone her interest in biology; during a summer internship at Woods Hole Oceanographic Institute in Massachusetts, she learned how to use the tools and techniques of experimental biology.  During her Ph.D. studies, Sun pursued computational chemistry at the University of California, Santa Barbara, exploring the molecular mechanisms of enzyme reactions.  She used her computational skills to illuminate the role of the “transition state,” an intermediate involved in the conversion of reactants into products in enzyme reactions; the work helped resolve questions that had long puzzled enzymologists.

During her post-doctoral fellowship, however, Sun once again switched focus.  Discontent with having to carry out her computations on others’ experimental data, she started a fellowship in experimental enzymology, during which she once again contributed to work that uncovered structural details of the mechanism by which a protein-synthesizing enzyme catalyzes reactions.

Sun switched gears once more when she started her own lab.  Presently, she is an associate professor at Harvard Medical School, working to unravel the mysteries of the innate immune system and the methods by which it detects invaders such as viruses and flags them for destruction.  Her work has already identified several key cellular players, including some that, when disrupted, lead to inflammatory disorders, such as Aicardi-Goutieres syndrome.  Intrigued by the therapeutic possibilities of her work, Sun has teamed up with pharmaceutical companies to explore treatments for a range of conditions.

Despite her quest for order, Sun’s career track has been anything but orderly. For this, though, she is thankful; there were many times that she was accepted into laboratories and programs without prior experience in those fields. It is not a trajectory that could have happened in Korea, where such unconventional paths are “frowned upon,” she says. “That is unusual even in America.” Which goes to show that, sometimes, chaos is just as necessary as order.