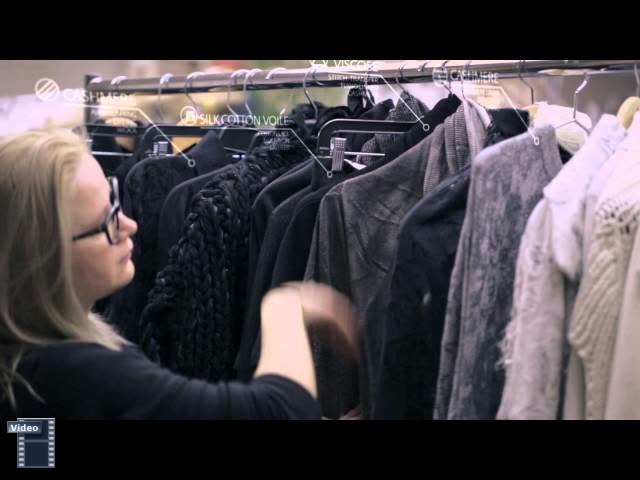 Designer Natallia Pilipenka was born in Ukraine and raised in Belarus before she moved to New York in her twenties.  She does not, however, feel particularly Ukrainian, Belarusian, or American; rather, she sees herself as a combination of all her experiences: places she has lived, books she has read, and people she has known.  “All those experiences,” she says, “define your identity for you.”

It’s not hard to see the accumulation of those experiences in her designs; she wears them, so to speak, on her sleeve.  In her womenswear collections, Natallia draws from influences as wide-ranging as traditional craft techniques to postmodern art.

Natallia’s earliest exposure to fashion came from her parents, who worked as food equipment engineers in a bread factory.  At night, they supplemented the family income by sewing and knitting clothing, or by taking in mending.  By the age of 11, Natallia had knit her first sweater by machine and embroidered it by hand; she also learned how to crochet, sew, quilt, and macramé.

Although Natallia loved experimenting with clothes throughout her childhood, pursuing fashion as a creative career was not an option in the USSR.  It wasn’t until she moved to New York that she had a chance to realize her dream of studying fashion, taking evening and weekend classes at the Fashion Institute of Technology (FIT) while working in the office of a construction company by day for two “really intense” years, she says.

With her background in knitting, sewing, and other crafts, Natallia found herself excelling at FIT, easily picking up patternmaking, draping, and other technical aspects of fashion.  Despite her success, however, she was, upon graduation, still unsure of her path in fashion.  “All the time I had this question in my head: Am I a technical person or am I a designer?” she says.  “And then, who am I as a designer?”

To settle the question, Natallia enrolled in the Fashion Design and Society MFA program at the Parsons New School for Design, where she was also a part-time instructor in the BFA track.  The program emphasized an interdisciplinary approach to fashion and encouraged students to look deeply at fashion as an artistic and cultural statement.

What she discovered, at the core of her identity as a designer, was a love of deconstruction and of craft.  “For me,” Natallia says, “a realization was that when I design, I remove something, and then I highlight whatever was removed, somehow, in the context of the design.”  She began researching other artists who used similar constructs in other media, such as William Burrough’s use of the cut-up method, in which texts are cut up and rearranged to form a new text, and Robert Rauschenberg’s “Erased de Kooning Drawing,” a conceptual collaboration between Rauschenberg and artist Willem de Kooning, in which a drawing by de Kooning was erased by Rauschenberg, framed, and presented as a new work.

What resulted was her own version of the cut-up method, rendered in clothing and culminating in “Erased,” her MFA thesis collection.  Natallia explored textiles and techniques that would carry the concept, such as devoré, a technique that burns patterns into a fabric, and also experimented with new ones, such as methods of transferring lace patterns onto other fabrics.  She also retained her devotion to craft, always incorporating an element of “the hand” into her designs while being conscious of balancing a modern aesthetic.

Overall, attending the MFA program was a “very good decision,” Natallia says.  This is confirmed by the sophistication of her designs, which find her conceptual and aesthetic influences fully fleshed out.  Still, upon reflection, Natallia notes that there is a “similar sense” between her new collections and the collections created before her MFA studies.  “At the end of it, I just realized, this is who I am, but just much stronger,” she says.  “It’s like as much as we try to be somebody else, our identity still comes across.”