Between Sanrio and Disney 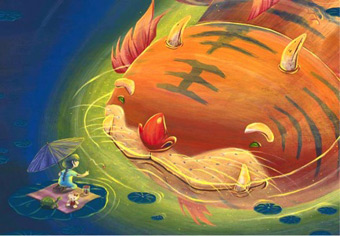 A quick glance through the portfolio of Taiwanese-born artist and illustrator Martin Hsu reveals that he is just as comfortable with Mickey Mouse as he is with Hello Kitty, deftly weaving the familiar characters and their cohorts into colorful scenes that draw heavily upon Asian art, from Chinese folk paintings to expressive manga styles.

As an illustrator. his work can be seen in the character designs for popular children’s cartoons by Nickelodeon and Disney, although, even in such staunchly American institutions, they hint at his Asian background: the character Kick Buttkowski is a subtle homage to the Japanese anime Speedracer, while the world of Ni Hao Kai-lan, a show that teaches Mandarin, is populated with Chinese characters, folklore, and architecture.

Perhaps it was for this reason that, once more, Hsu was recruited to join the Secret Identitiesteam to collaborate on Shattered, the second volume of Asian American comics released last November by The New Press, with help from a grant by the Vilcek Foundation.  “I wish I could say we all met while getting our masters in Tai Chi,” Hsu says, “but my buddy [and Secret Identities Managing Editor] Parry Shen emailed me one day and I said yes.”  The comic anthologies were created to showcase Asian American artists and writers in the comics industry, as well as original characters and stories that reflected Asian American culture. 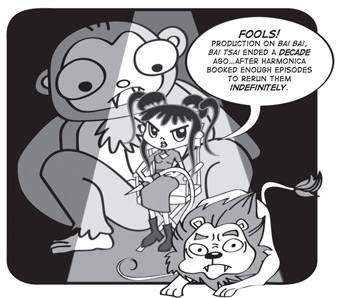 While the first volume, published in 2009, focused on superheroes, Shattered turned a critical light instead to villains, using the theme to examine portrayals of Asian Americans throughout pop culture — which, historically, have not been flattering.  In this volume, Hsu teamed up with Editor in Chief Jeff Yang for the chapter “Bai Bai, Bai Tsai,” which features a former child star-turned-villain.  Given complete freedom for design, Hsu brought on Sophia Lin, a friend he collaborated with on the Ni Hao Kai-Lan designs, to create artwork that set the scene for Yang’s action story while evoking the playfulness of children’s television shows.  “It’s an adorable satire that pokes fun at our obsession with child stars,” says Hsu.  “Where are they now?  You’d have to read the book!”

Considering all this, it is not surprising when Hsu says that he considers his Asian background to be “the most important thing about my art and myself.”  This self-assuredness, however, was hard earned; when Hsu first arrived in the United States as a teenager, he faced language and cultural barriers “as tall as the Great Wall,” he says.  As with most teens, Hsu tried his hardest to fit in: “Hair was dyed, outfit was altered, and accent was erased so I could be a part of the norm,” he recollects.

Martin Hsu shares the inspiration behind his Dragon Boy character: his own daily adventures as an immigrant in the cosmopolitan city of San Francisco.

Today, Hsu has learned not only to accept, but to embrace, those aspects of himself that set him outside of the norm, including “an underbite, high cheekbones, and a big forehead” – coincidentally, the same features found on the infectiously cute, high-energy Dragon Boy, an original character by Hsu that is inspired by “the concept of a little boy in a foreign land.”

Hsu is currently working towards his first full-length book that will detail the adventures of Dragon Boy and his canine sidekick Blacky, as they search for their roots and get to know the denizens of exotic lands – a story that should be, Hsu says, familiar to any immigrant in this country.  In the meantime, Hsu will be heading back to his homeland of Taiwan to participate as one of two artists in the 2013 Young Art Taipei show, a contemporary art fair that introduces emerging artists from around the world.  There, he’ll be exhibiting his life-sized Dragon Boy sculptures, created in collaboration with Taiwanese company VTSS Toys – an apt homecoming for both Hsu and his alter ego.

Watch Dragon Boy come to life in this time-lapse video of Martin at work in his studio!