A first night for My Last Day Without You

For Christoph Silber, falling in love was as easy as boy meets girl. On his first visit to New York City, the German-born filmmaker struck up a conversation with a stranger on the subway. One week later, they decided to spend the rest of their lives together.

Christoph is not one to keep his riches to himself. His story is the inspiration behind the film My Last Day Without You, co-written by Christoph and longtime collaborator Stefan Schaefer, and similarly featuring a chance encounter between a German visitor and a native New Yorker. He hopes that it will inspire others to believe in love; it is, he says, “one thing as a storyteller that is worth doing. I’ve written dark and complicated stories too, but since I found happiness, I wanted to let people know that it exists; I know a lot of people are desperate and wondering about it.”

This weekend marks the film’s theatrical release in Atlanta, Seattle, New Orleans, Chicago, and Washington, D.C., via AMC Independent. The film had its initial release at the Brooklyn Film Festival and has screened at festivals around the country, including at the 2012 Hawaii International Film Festival, as a selection in the Vilcek Foundation-sponsored New American Filmmakers showcase. To promote both the opening and the idea of true love, Christoph and his collaborators have invited fans to record the stories of how they met the loves of their lives, and the chance occurrences that brought them together, for an opportunity to have their stories shown before the premiere.

My Last Day Without You follows the two characters throughout a tumultuous day, and in doing so, the film becomes a lovely homage to New York itself. Born to parents who were involved in theater (his father was a Shakespeare scholar and theater director), Christoph cultivated an appreciation for the performing arts early in life. He grew up watching foreign movies, especially from the United States and the United Kingdom, which shaped his earliest conceptions of New York — they were, thankfully, not too far from the truth: “When I first got here, I thought, yes, Woody Allen is a genius, but he’s also just picking up on everyone around him, because the people really were like that!” 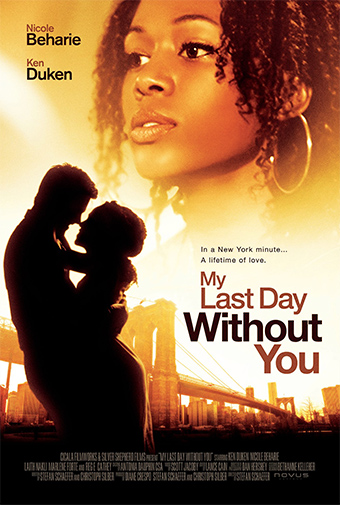 Although Christoph has lived in the U.S. for seven years (he currently resides in Los Angeles), he still speaks of a sense of restlessness when searching for a place to call home. His grandmother had left Germany before the Nazis assumed control of the government, and his father was born in Shanghai. After World War II began, his father was sent to school in Britain while his grandmother returned to train secret agents to infiltrate Nazi Germany. Christoph grew up in a bilingual family in Germany, but, he says, “what [my family history] did to me was create a feeling of not being able to live in one place,” he says. “And maybe it’s a Jewish thing too, but America was the answer to that, because that sort of cultural homelessness works best here, especially in New York, where everyone’s from somewhere else, and a new world is sort of a blank page.”

My Last Day Without You, however, helped to cement Christoph’s sense of home in his adopted country: “The film was a project that helped me make friends in this new world,” he says. “It was very sweet to feel so welcomed by [this community of] independent producers and filmmakers. It was the most positive immigration experience you could have; I was completely embraced by these people.”

We hope that this warm embrace will continue through My Last Day Without You’s opening weekend, starting this Friday, October 4. Read more about the film.